Learning How To Dance In The Rain 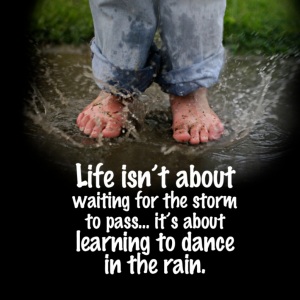 Something very powerful happened to me last week.  This “something” has been unfolding itself over the last month or more in a rather “stormy” time when I am TRUSTING that my bank account will soon see streams of income flowing in based on the heart and creative centered actions that I am taking one step at a time.

Instead of contracting into scarcity it was my decision to change my mindset – as you Richard so eloquently spoke of in your last post – and to “dance in the rain” instead.  My dancing had to do with a regular “street person” that I see frequently as I take the same route to places that I frequent.

Mother Theresa once said, “Kind words can be short and easy to speak, but their echos are truly endless”.   I believe that words, actions, smiles, creative, spontaneous, and anonymous acts of kindness and generosity all contribute to being the change we wish to see in the world.

There are opportunities all around us. Perhaps you see the person with a sign, standing on the median divider on a road well traveled, as someone who has a story to tell and gifts to give.

Who are they? What set of circumstances lead to their being there?  Do you roll up your window and pretend that you are busily engaged, or do you acknowledge them with a smile or a wave, or deeper yet as a whole human being who has needs just like you do and gifts to share.  Do you engage in conversation while you wait for the light to change?

One day I was curious about just such a person.  His name is Joseph and his sign is a little different.  He holds a picture of a friend that he has drawn and calls himself a disabled artist.  Not satisfied to just give him money, I wanted to know his story.  What transpired over a period of about 6 weeks was a back and forth dialog in which I challenged him to draw a self portrait which I would pay him for.

Result?  We looked forward to seeing each other when I passed by and there were always a few words shared and stories told about the project that I had given him.  When he came up against a perceived “roadblock” to completing this assignment we mutually brainstormed about how to get around it.

place where he stood – I was amazed at the skill and creative genius that was captured in the stunning self portrait that captured his essence.  I handed him the money that I had promised.  In return he was so elated to have this creative gift received in such a positive way that not only was a hug forthcoming, but there was a promise of more art to come.

Now I may never really know what impact this has made in his life, but for me I felt so much gratitude for the self-portrait and the meaning behind it. This person is making the best of his life and not willing to give up on the artistic gift that he has been given.  I received from him the courage to keep taking my steps no matter what the outward monetary circumstances may be in my own life.

I might add that when I said to him one day passing by, before he finished the picture, that I knew it was more of a challenge to do a self-portrait, he said to me – “I like a challenge”.  And he did!

Now, if I would have never engaged him in the first place out of a place of curiosity directed from the heart, then none of this would have happened.  The day that we exchanged portrait for money – all forms of energy – I felt more open and receptive to what my own life was calling me to do.

Next time there is a “storm” in my life I will be looking for the dance steps to take certain that the echos of my footsteps will be endless….will you?

OTHER BLOGS BY GAYE ABBOTT:

Posted in Be The Change, Consciousness Shift, Helping Others